Mumbai Indians turned out to be the triumphant side in the 2019 IPL Final against Chennai Super Kings. The summit MI v/s CSK clash also known as El Classico of Cricket was a treat to watch where MI edged past CSK by 1 run to lift the IPL trophy for the 4th time. Led by Rohit Sharma, MI beat CSK for the fourth time this year and turned out to be the winners of the tournament.

• Quinton De Kock gets MI to a Blazing Start

After winning the toss, Captain Rohit Sharma decided to bat first on the night of the final. De Kock got MI to the perfect start by hitting three sixes off Deepak Chahar’s second over. Chahar for CSK had been the best power play bowler and charging against him was essential for MI to have a blazing start. De Kock finished as highest run getter for MI as he scored 529 runs at a strike rate of 132.91.

Kieron Pollard has been a saviour for MI in IPL. On the night of the finals too he lived up to his role. All of MI’s batsmen were sent back to the dugout and Pollard along with Hardik Pandya brought the MI innings back on track. He smashed a quick fire 41 of 25 balls to power MI to 149 in their 20 overs. He is the highest run getter in MI v/s CSK finals and his knock was crucial for MI’s victory.

When Pollard hits the ball, he just sends it into the stands. Such is his power and brutal force. Also, Hardik Pandya clears the boundary with ease. Both of them have great muscle strength.

• MSD runs himself out first time in 2 years

Dhoni who is among the fastest in running between the wickets got run out at a crucial stage of the match. MS Dhoni has been the best batsman for CSK in this season and his wicket was certainly the turning point of the match. Ishan Kishan’s accurate throw hit the bull’s eye and Dhoni had to depart as he fell only a few millimetres short of the crease.

• Watson finally pays off the Faith paid in him

Dhoni’s run out meant that CSK was in great trouble and onus of taking CSK beyond the finishing line shifted to experienced Shane Watson who until the finals had not played according to his reputation. He had scored 308 runs till the nights of final and had only one good innings of 96 runs. However, known to be a big match player, Watson (scored 80 runs) repaid the faith showed in him by CSK and MS and he kept CSK in race till the last over where he got run out.

The value that Bumrah brings to MI side is just immeasurable. He bowled his quota of 4 overs for only 14 runs and picked 2 wickets. More importantly he kept the run rate down even when Watson was going hammer and tonks and scoring runs at will. Bumrah bowled the 17th over for just 4 runs and 19th over for just 9 runs which kept the asking rate high. Bumrah just showed why he is the best death bowler in the world.

Malinga has been the leader of MI bowling department since a very long time. Even though Bumrah leads the current pace attack, Malinga is a vital cog in it. Bumrah-Malinga form the most deadly combo when it comes to death over. Malinga showed his class once again by hitting the yorker right and getting Shardul Thakur out on the last ball to help MI lift their 4th IPL Trophy.

2 runs were required of the last bowl for CSK to win and MI had to just bowl a dot ball to win. On such a crucial stage, Malinga kept his cool and bowled the perfect yorker to get a wicket. Being focused in pressure situation is the most difficult thing to do, yet Malinga did it with ease. 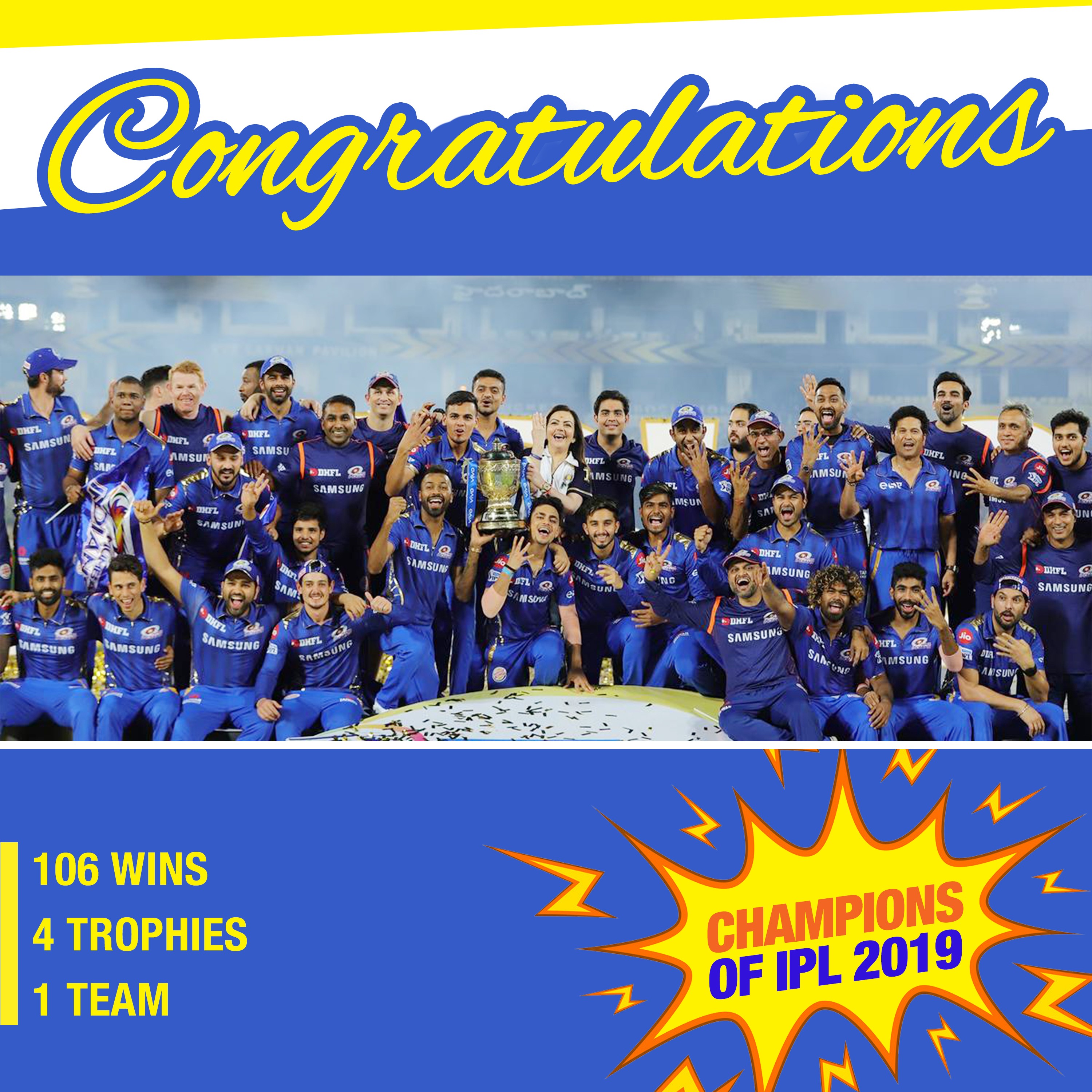 With all the drama and last ball finish, IPL 2019 final was the best of all the finals of IPL in 12 seasons. MI has made to 5 finals and won 4 of them making them the most successful team in the history of tournament. The have played excellent cricket thorough out the tournament and rightly ended it as the Champions of IPL 2019.

The IPL tournament was quite long and was played in hot Indian summer. This required players to be adequately hydrated in order to stay healthy for the entire tournament and help their team win the trophy.